Zing Tsjeng, the editor of Broadly (the online women’s website from Vice, described as the ‘slickest feminist platform around’) and the author of The Forgotten Women series, visited our UK head office on International Women’s Day to discuss the issues women leaders and scientists have faced and still face.

After she joined employees for a panel discussion and Q&A, Zing sat down with Fatima Benkhaled, an Engineering student at King's College London and one of a number of students studying in London, Cambridge and Edinburgh selected for the Amazon Women in Innovation Bursary, a programme which supports female students aiming for a STEM career.

Fatima asked Zing about her thoughts on bursaries and quotas for women and people from diverse backgrounds.

“I know some people really resist the idea of bursaries, because they think it is “unfair,”” says Zing. “But I think these things really are important because what we are making up for is an historical lack of women and ethnic minorities in certain industries.

“So you are up against hundreds of years of history of people being barred from the very industry they are trying to improve, so when you look at something like a quota, or something like a bursary you are not actually disadvantaging people, you are offering disadvantaged people the same opportunity that other people have gotten all their lives. I think that is why they are really important.”

Fatima, who has a mentor at Amazon as part of the support she receives through the Bursary, asked Zing how important she thought female mentors are when it comes to engaging women with STEM - both in education and business.

“I think it is so important to have a female mentor,” says Zing. “There is something about being able to talk to someone who you know is on your level, who shares the same kind of background as you – that’s really valuable, because if you don’t see yourself in the kind of companies or in the kind of industries you want to be in then you’re going to discouraged and you’re going to feel put off. You are going to think ‘Is this place really for me? Should I try fighting this fight, because I know it's going to be difficult? Maybe I should just throw in the towel.’ And that is not something that should be dismissed,” Zing continues.

“I feel like that is a really understandable response if you don’t see a place for yourself.”

Fatima agrees, adding: “My mentor has been incredible, she is essentially where I want to be. So her past is essentially my future. For me personally, having someone to look up to, who was in a class like myself that was male dominated, and went into a company like Amazon and explained to me the process from where she started to where she is, and how, as a company, Amazon has helped her – it helps me to dream! It allows me to think ‘You know, I can do it!’, ‘I can apply my degree’ or ‘I can be myself, it doesn't matter what my ethnicity, my gender, my religion.’

It doesn’t matter who you are you can do it, and having someone to look up to has helped me a great deal.

“It doesn’t matter who you are you can do it, and having someone to look up to has helped me a great deal,” says Fatima.

Fatima also asked Zing, who has written two books about women who shaped and were erased from our history - Forgotten Women: The Scientists and Forgotten Women: The Leaders - for her top advice for aspiring female leaders and women in STEM on building a lasting legacy for themselves.

Amazon Women in Innovation BursaryWomen in innovation Women in business
How did you like this story?
Yawn.
It's OK
It's Good
It's Great
I love it!
Thanks!
Sustainability

When it comes to company culture, Amazon is barking up the right tree.
Continue Reading
Company news

A roundup of actions Amazon has taken to reduce the spread of the coronavirus while supporting those directly and indirectly impacted by COVID-19.
Continue Reading
Amazon responds to COVID-19
How we're supporting our employees, customers, and communities
Read more
X
Out for Delivery
Thank you!
Please try again
Quick news and rich insights from inside Amazon, delivered directly to your inbox every few weeks.
Check your inbox shortly for your very first Out for Delivery email. We’ll reach out every few weeks with more.
If you’re not redirected back to the blog in a few seconds, click here.
Looks like we had some trouble authenticating your entry. Let’s try again...
Amazon Privacy Policy | Opt out anytime
Return to video player ➡ 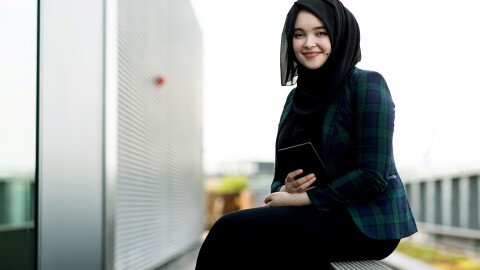