The strength behind a smile

For our Amazon Fashion Production Manager, Balvinder, a cancer diagnosis became an opportunity to build mental resilience, find her true self and make a difference in other people’s lives.
By EU Amazon Stories Staff

Dazzling is the word that comes to mind: Balvinder Pawar’s smile lights up her whole being with the power of a small supernova. You can feel positivity radiating from it. “I have this inner belief in me that life is great,” she says. “I feel blessed!”

A single mum and a Production Manager at the Amazon Fashion Studio in London, Balvinder has many reasons to smile: she recently completed her chemotherapy and, for the second time in her life, has beaten breast cancer. Remarkably, she managed to turn her personal struggle into a source of strength and purpose that has transformed her life for the better - and touched that of the people around her.

Balvinder had joined Amazon in 2015. “The Fashion Studio had just opened,” she recalls. “Coming from the creative world of advertising, the Amazon data-driven mentality was a brand new universe for me. It was a bit of a cultural shock.” Only four months later, her life was turned upside down. It was breast cancer awareness month, and she decided to check herself: “I had never done it before. I was shocked to find a lump.” When the diagnosis was confirmed a few days later, she felt confused, her mind reeling with questions: “I was at work, I thought: what do I do now? My manager was phenomenal. She hugged me tight and told me to go and take care of myself. My job would be waiting for me – a part of my life I didn’t have to worry about. Everyone supported me in a way I couldn’t have imagined.” It took almost a year for Balvinder to win her battle against the tumour. “There were days when I had to shut down, because my therapy was so aggressive. But eventually I came through, and I felt incredibly grateful for it.”

A source of purpose

When she felt ready to return to work, Balvinder was welcome back into her team. “I was thankful for all the support I had received. That feeling gave me strength, it gave me new purpose. I felt like had missed out on one year of my life, and I wanted to pull back time, live fully and give back to the people around me. To do so, I realised I could leverage the strength of Amazon.” She set out to organise a charity sale for employees using fashion samples from the studio. Her team volunteered their own free time, and the response was overwhelming: “We were surprised by the level of participation. We had people queuing,” she smiles. In one day, they raised £16,000.

The success of the first initiative led to the organisation of a second, bigger sample sale inside the company headquarters, as well as a charity fashion show in collaboration with the Prince’s Trust, which raised a further £18,000. Passionate about fostering wellbeing and engagement in the workplace, Balvinder began mentoring other employees and facilitating trainings to hire and develop the best. “Through these experiences, I learnt that Amazon is a place where you can have an idea and run with it.” In that period, Balvinder also got promoted and she felt that her professional life was back on track. “Most importantly, I had redefined my identity: besides my role at the fashion studio, people had come to know me for my charity and mentoring commitments. That’s who I am. Amazon has allowed me to bring my personal values into the workplace. To me, that’s what success looks like.”

Balvinder was then diagnosed with breast cancer again in 2019. “The first time, I had allowed myself to become only a patient, but I was having none of that this time around,” she says. “Having cancer doesn’t mean that life has to stop. I wanted to continue working, and to build a support community inside the company.” By leveraging her internal network, she connected with Mike Mackay and Jonathan Jenkyn, two fellow Amazonians who had also experienced severe medical conditions: “A few months ago, we hosted the first meeting of Amazon’s Critical Illness Support Group,” she says proudly. The group is an anonymous space where employees can share their experiences and concerns, ask for advice or just listen, in a judgement-free environment. “We can discuss our fears, how to deal with a relative or a partner who is going through a critical illness, or how to approach these topics with our managers and maintain a measure of professional normality. It’s a way to balance our professional, personal and medical identities.”

In collaboration with the affinity group Women@Amazon, Balvinder also created an employee group focused on raising breast cancer awareness. In October, the group held a new fashion sample sale with racks and racks of pink clothing and lingerie items on display. “Employees were encouraged to pick up a bra for free. In turn, they had to pledge to check themselves once they got home,” she explains. 320 pledges were made on the day, and the money raised was donated to Wear it Pink, a charity supporting breast cancer research, and Magic Breakfast, an organisation providing healthy school breakfasts to disadvantaged children in the UK.

Looking back at her journey, Balvinder feels that the balance is positive: “I have become a better, happier person - I feel blessed for what I have gone through. For me, happiness is being mentally strong, and now I want to help as many people as possible achieve this kind of strength.” What is her secret to remain so upbeat in the face of everyday highs and lows? Balvinder smiles her bright smile: “Cake. You can never be unhappy when there is cake!”

Working at AmazonAmazon StoriesIn the community
How did you like this story?
Yawn.
It's OK
It's Good
It's Great
I love it!
137 Ratings
Thanks!
Sustainability 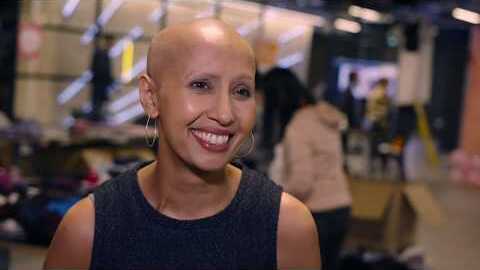 The strength behind a smile