Time for a game

For Hazel Reynolds, the desire to start a family was the inspiration to reinvent her career and become a game designer.
By Day One Team

Designing games wasn’t always in the cards for Hazel Reynolds, but wanting to break free of a media job, be her own boss and, above all, start a family led her down a new path.

At 28, Hazel was increasingly frustrated by the demands of working in London’s magazine industry and long daily commutes from Brighton. It was a moment with her then twelve-year-old sister that helped her discover a new, unexpected career opportunity: “I was visiting her in Yorkshire and found that she was playing all the time with her tablet. She would only come to life when we were playing family games. So I came up with the idea for a game that could capture her attention: that first idea eventually became Randomise.”

It began by writing words on blank cards, which Hazel would rearrange to generate scenes to act out or draw with her sister. Soon, Randomise was being played by the entire family and with friends. Knowing she was onto something, Hazel refined the rules to maximise the fun, while her friend Lee, a professional illustrator, helped her create the graphics that would ultimately give Randomise its distinctive look.

“I always liked the idea of being my own boss, plus I wanted to have time to start a family. Could Randomise work as a business and allow me to be independent?” Hazel took the leap. “By that time I was looking for a new job. I chose to give myself four months and see if this could really work.” The timing was perfect: the day after founding her company, Gamely Ltd, Hazel discovered she was pregnant with her son Charlie.

She opened a Kickstarter account to test the waters: “I didn’t want to use the savings of a lifetime just to find out my friends were only being kind!” To her delight, she managed to raise £4,500 to manufacture the first batch of games, which she began to sell through physical retailers.

“It was encouraging, but the logistics were more complex than I had anticipated. Amazon was an obvious choice, it is a key place people go to when they are looking for toys and board games.” She signed up for Fulfilment by Amazon (FBA), Amazon’s logistics service: “I used to be knee-deep in tape and bubble wrap; now I could simply send to Amazon a big batch of games, and they would take care of everything, from packing to shipping.”

Randomise applied for Amazon Launchpad, a program specifically designed to give extra visibility to start-ups on Amazon. “It allowed us to upload extra images and a video to convey the hilarity of playing Randomise. We took part in deal schemes like Deal of the Day. It was a fantastic way to get people to play.” Soon, her business went from selling a handful of copies to hundreds in a matter of months.

Hazel has now licensed foreign language versions of the game, and with both a young family and young business, her time is more precious than ever. She hasn’t lost her playful attitude: “Amazon has helped me make time for my family and focus on what I am good at, which is coming up with fresh ideas for new games!”

ExportsSMEWomen in businessAmazon StoriesLaunchpadSeller story
How did you like this story?
Yawn.
It's OK
It's Good
It's Great
I love it!
Thanks!
Sustainability 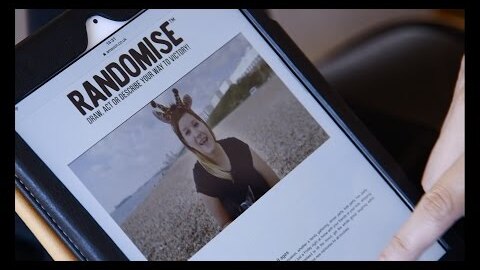 Time for a game