The power of simplicity

Ravi and his father found smartphones too complicated. Now they sell their own easy-to-use phones across the world.
By Day One Team

When Ravi Daryanani joined his father's retail business in 1999, neither of them imagined that what began as a video library in Kings Cross, London, would one day make mobile phones and sell them worldwide. “We started focusing on mobile phones soon after I joined my father,” Ravi explains. “I was quite young and I found it an interesting product – mobile phones were the latest gadget and here to stay.” At first they sold all their phones from Teletape, their shop on Caledonian Road. However, in 2006 they discovered new possibilities in an unexpected way: “We had a thousand units of a particular phone model that was proving tricky to sell. We put them on Amazon and the stock sold out in just a couple of weeks, opening my eyes to the possibilities of online selling.”

A simple gap in the market
Over time, Ravi and his father identified a niche in the growing and fast-evolving mobile phone market. “Phones were getting more and more complicated, with new features and applications. If you give a smartphone to someone who doesn’t quite understand, it’s a minefield for them to simply make a phone call or send a text message…” They decided to go back to basics and create their own mobile phone range. “Our phones are aimed at older people and the disabled who particularly want a phone that is simple and easy to use.” With features such as big buttons, clear displays, extra-loud volume and docking stations for easy charging, the TTfone range was born.

Managing the workload
“We started producing one model. Now we have nine models and we sell more than half of our mobile phones through Amazon.” Ravi and his team, now composed of five more people, soon decided to use Fulfilment by Amazon (FBA), a service that allows them to store some of their stock in Amazon warehouses. When the product is sold, Amazon takes care of the picking, packing and shipping, as well as providing customer service. Ravi’s easy-to-use phones are now also making waves in new territories, selling on all of the European Amazon marketplaces.

“As we expanded internationally, it was becoming increasingly difficult for our small team to cope with the volume of orders. FBA gave me the chance to expand my business, as well as some breathing space. Before, I used to work till 8 or 9 o’clock at night, and my kids were fast asleep by the time I got home. Nowadays I get to leave on time and see them before they go to bed, which is priceless.”

Small company – wide reach
TTfone has now sold tens of thousands of mobile phones, all of them designed and produced by Ravi and his team: “We are still a very small company, but by selling on Amazon we have the opportunity to compete with the big brands in this area. What we feel sets us apart, though, is our hands-on approach: because we design and manufacture everything in-house, we find it easier to give our customers exactly what they want.”

The shop founded by Ravi’s father will soon celebrate its 20th anniversary. “We are excited about developing new models, expanding to the U.S. and continuing to help senior members of our society to stay in contact with their families. I don’t think my dad thought in 1995 that the business would achieve anywhere near the success that it has. When my dad started this shop, his customer base was the street behind us, the street in front of us and a little passing trade. Now, people all over the world can buy our products. Pretty amazing, really.”

Amazon StoriesEntrepreneursSeller storySMESelling on Amazon
How did you like this story?
Yawn.
It's OK
It's Good
It's Great
I love it!
5 Ratings
Thanks!
Sustainability 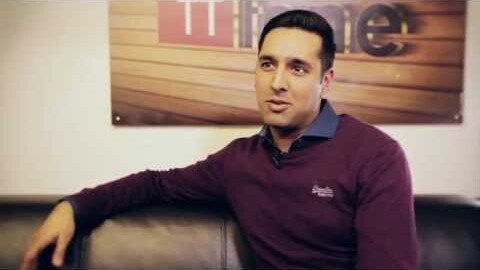 The power of simplicity