Lyrics, music and novels: a lover of words

Jamie is a songwriter and singer who discovered writing novels was the best way to pass the time while on tour. Thanks to Kindle and Amazon Music, his fictional band has reached thousands of fans.
By EU Amazon Stories Staff

“My life has been about writing.” Looking back at his personal path, Jamie Scallion - self-professed lover of words, musician and now best-selling author – has no doubts. “More than anything else, I love writing lyrics. And my songwriting influences the way I write my books.” As a child, Jamie’s first interest was music, a passion lit the day he discovered his dad’s record collection: The Beatles, Elvis Presley, The Doors, among many others. “I was eight or nine and listening to those songs was the greatest thing. That’s where everything started for me.”

Life in a band: from reality to fiction
Jamie’s dad encouraged his passion by teaching him three chords on a guitar. “I taught myself three more: I use those six chords to compose all my songs.” He wrote his first at 15, with his best friend. “It was the worst song ever, but of course I thought it was amazing,” he laughs. That led to the two youngsters creating a band, which later became known as Officer Kicks. Jamie was the manager and lead singer. For fifteen years they toured the world with big groups, played at festivals and recorded two albums.

If with this competition I’ve encouraged one child to write songs for the rest of their life, whether professionally or as a hobby, then I’ve done the right thing.

Touring also meant long days with little to do, waiting to go on stage. “We could either spend the days drinking or doing nothing”, Jamie recalls. “I woke up one morning and decided instead to write. It literally flooded out of me. It was cathartic.” Drawing from his own experiences, Jamie drafted the story of a fictional group called The Rockateers. “I was interested in the interaction between my band members and me, how different we all were. I thought it would be fun to explore that in a book.” It was the birth of the Rock ‘n’ Roll Diaries.

Bringing fiction to life
But books weren’t enough. Jamie was collaborating with the rock band The Scriptwhen the idea emerged to bring the novels to life and give the fictional Rockateers their own real soundtrack: together with The Script he wrote the music for a 4-song EP. What Jamie had in mind was an enhanced book, a story that could be experienced by the audience on multiple levels.

In search of a solution to make it happen, Jamie turned to Amazon: “I had considered traditional publishing, but I wanted to shape this project in many different ways. Amazon gave me the freedom to do what I wanted and the infrastructure to help me get there.” His first novel, Making it, was published both in eBook and paperback with Kindle Direct Publishing (KDP) and CreateSpace, Amazon’s independent publishing services. He also recorded the audio book himself through Amazon’s Audio Creation Exchange (ACX), a challenge he admits took him three days, and finally, the EP was released on Amazon Prime Music.

“We were surprised by how well it went”, says Jamie. “I went on tour with The Script: we played the music and videos of our fictional band to thousands of people every night. We did a lot of stunts on stage. The response was incredible.” While the novel got five-star reviews, the EP was played by thousands of fans online, soon reaching number one on the Amazon Music charts in the UK. “The customer reach was the biggest benefit offered by Amazon”, Jamie says.

Three years after the release of the first novel, Jamie has published two more books and EPs, and a full album compilation is now in its final stages. “What I love the most is the collaboration. When you write you are in a bubble, but now there is a community of young, avid readers I can interact with. Their feedback is precious.”

The songwriters of tomorrow
Knowing how challenging it can be to get kids to read, Jamie has decided to devote some of his time spreading his passion for words. “Reading is fun, it opens up a world of discovery and it can help children do better in life, whatever they do. Plus, as a lyricist, I worry about the future: if kids aren’t reading, where are the songwriters of tomorrow coming from?”

As an ambassador for the National Literacy Trust, he gives talks about reading to schools and runs songwriting workshops. He has also invited 14-18 years old to pick up a pen and enter a competition to write a verse for a song on the album he’s completing. The winning line will be included in the song, and its author will be invited to London’s Dean Street studios to complete the lyrics with Jamie.

“If with this competition I’ve encouraged one child to write songs for the rest of their life, whether professionally or as a hobby, then I’ve done the right thing”, he says. His passion, both for words and music, is infectious.

Amazon StoriesKindle Direct Publishing AuthorsEmpowermentAmazon Music
How did you like this story?
Yawn.
It's OK
It's Good
It's Great
I love it!
Thanks!
Sustainability

When it comes to company culture, Amazon is barking up the right tree.
Continue Reading
Supporting small businesses 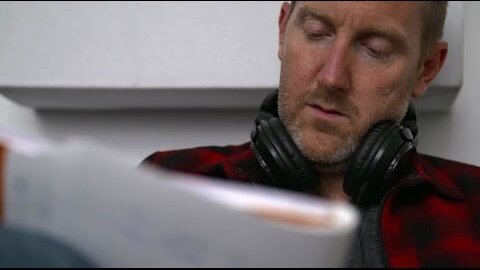 Lyrics, music and novels: a lover of words