How I started my own delivery business with Amazon’s help

Former Amazonian and Army Captain Ed Hattersley tells the story behind Warrior Logistics, the independent business he founded with the help of Amazon, and his commitment to helping veterans in their civilian transition.
By EU Amazon Stories Staff

It’s 9 in the morning in the industrial area of Sheffield. A group of men and women wearing a blue courier uniform, an Amazon logo on their back, gathers around Ed Hattersley, the founder of Warrior Logistics. Today, they are delivery drivers, but they come from different walks of life: amongst them are a former engineer, electrician, accountant, IT professional, and pizza maker. Many come from the military, like Ed himself. To all of them, Warrior Logistics has offered the opportunity for a fresh start. The company itself is quite young: Ed set it up in July 2019 with the help of Amazon’s Delivery Service Partner programme, an initiative helping former Amazon employees start their own independent delivery companies.

A Captain in the operations world

Born and raised in Sheffield, Ed had never thought of himself as an entrepreneur. At 21, he joined the Army as an Infantry officer, turning his childhood dream into reality. For nearly 8 years, Captain Hattersley travelled the world, from Northern Ireland to Afghanistan to the Falkland Islands, before life priorities started to shift: “I wanted to start a family, settle down,” he recalls, “so, in 2013, I left the Army.”

Transitioning into civilian life proved challenging. “The initial cultural clash between military and civilian mind frames was staggering. I didn’t know what I wanted to do next: my friends went into banking and consultancy, but that wasn’t my call. At some point, I entertained the idea of becoming a dog walker,” he smiles. Then, pragmatism won: Ed sized up his skills, a predisposition to manage people and an ability to handle ambiguity and pressure, and chose to play to his strengths. “I went for a role in operations management with a national company,” he explains. Two years later, he would join Amazon, where he would cover a number of different roles, supporting the launch of several Amazon Logistics delivery stations in the UK and Italy and building a solid understanding of the logistics industry.

It was a tragic personal event that sparked the creation of Warrior Logistics. “In 2017, following a tough transition experience, a close friend of mine from the Army passed away,” Ed remembers. “That had a huge impact on me. I had struggled, too, emotionally and financially, but in the end I had found my feet. I wanted to show other people in similar situations that a new start was possible. I wanted to do something to help.”

During his career at Amazon, Ed had helped 14 veterans join the company, but he felt that it wasn’t enough. “So many talented people leave the military and have trouble marketing, or even recognizing their professional skills in the civilian job market,” he explains. “We are talking about people who were responsible for soldiers’ lives in war situations, or who handled millions of pounds worth of equipment and, in spite of that, may end up unemployed or underpaid.” By founding his own company, Ed thought, he would be able to support veterans as they were transitioning into civilian life, offering them work as they navigated the change.

The timing couldn’t have been better: as Ed was developing his business idea, Amazon launched its Delivery Service Partner programme, an initiative designed to support existing employees who wish to leave their Amazon roles and start their own independent delivery business in response to growing customer demand. “It was as if stars had aligned,” Ed recalls. “As an Amazonian, I had gained enough experience in the field to know that I could run my own logistics business. It was a fantastic opportunity to turn my idea into reality.”

The Delivery Service Partner programme covered the start-up costs for Warrior Logistics and provided Ed with a business grant to help him get the company off the ground. “Through the programme we could lease branded vans, and purchase uniforms and insurance at a discounted price,” Ed explains. “Having a contract with Amazon means we can count on a consistent volume of packages to deliver.”

People, the heart of logistics

What does it take to set up a logistics company? “First, you need passion,” Ed says. “It’s demanding and fast-paced, you can’t do it half-heartedly. Then, you need money,” he continues. “With Amazon’s support, to be fair, I didn’t need that much. And then, it’s about the people. Logistics is essentially vehicles, products, and a person, the driver. That person is the heart of everything. If you forget that, you’re doomed.”

True to his vision, Ed is working to offer the drivers more than just an opportunity to pay the bills: “I work for the long term, and not just with veterans. What we do can be demanding, but it also provides flexibility to those who may need it. ” he says. “Not everybody may want to be a driver for all their lives, and that’s ok.” Ed is engaging with schools and charities around Sheffield to provide drivers with opportunities to keep learning alongside the day-to-day work.

So far, Ed’s strategy has been successful: “It’s been brilliant. We are growing at an incredible pace, I have new drivers coming in every week and I am happy to offer them an opportunity. I love being around people and seeing them succeed. Sure, leading a business is challenging. But with someone like Amazon backing you, it’s easier.”

Supporting small businessesAmazon Stories
How did you like this story?
Yawn.
It's OK
It's Good
It's Great
I love it!
249 Ratings
Thanks!
Sustainability 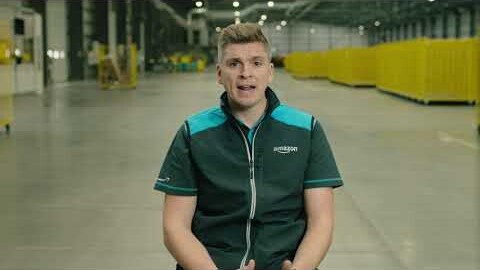 How I quit my Amazon job to start a delivery business