Kano is the company behind the computer anyone can make, with simple steps, playful projects, and creative tools for people who want to make technology, not just use it. Kano launched in 2013 and developed with the help of hundreds of young people, artists, and teachers worldwide.
By EU Amazon Stories Staff

Given that Kano’s mission is to demystify the technology behind everyday devices, it should be no surprise that their Head Office in East London is at the back of a restaurant in a barebones open space, and their conference room is built out of cardboard boxes. Everything at Kano is about rejecting the polished surface and exposing people to simple but endlessly creative basics.

“The generation rising now has infinite potential,” says Alex Klein, CEO and co-founder of Kano. “You can learn almost anything for free online. However, the first computer they experience is typically closed. It’s a perfect, polished, hermetically sealed machine.”

With Kano I get to make a computer and learn coding, which is pretty close to inventing.

Klein feels that people have no possibility of accessing, in a fun way, the ideas that make the machine work. “It’s not just about teaching code so kids can get jobs,” he says. “And it’s not just about creating the next generation of engineers. It’s about giving people a fun way to understand how the world around them works, so they can express themselves and feel a bit more in control of their future.”

Giving kids the ability to build and code their own computer makes the whole idea of programming and computer science more accessible and less mysterious, according to Klein. By demystifying devices, Kano hopes to encourage tinkering and experimentation in computing and beyond.

This mission is apparent in everything at Kano from the desks strewn with computer components and colourful wires in their Head Office, to the computer kit itself, which is a lesson in simplicity and transparency. Each kit contains a clear box to house the main components of the computer, a bright orange keyboard, a memory card, an HDMI cable to connect to any monitor, a speaker, and a storybook to launch users onto the journey of building a computer.

And customers are responding to the mission. The first 200 units that Kano manufactured sold out immediately, surprising the then-fledgling startup. Presently heading into their 5th year of business, they now sell in 86 countries and have sold more than 150,000 kits. “Amazon helps us reach new customers, tell the story of our brand, and expand our product offering,” says Klein.

Angelie Vourdaki, Public Relations Associate, agrees, saying: “Amazon Launchpad is such a great website for customers to find new, innovative products. We want to show the world that digital literacy can be exciting and creative. And Launchpad is helping us tell that story.”

Amazon Launchpad is designed to help startups such as Kano to launch new products on Amazon and get them discovered. Launchpad uses Amazon’s ecommerce expertise, global infrastructure, and marketing tools to help startups tell their story and deliver products to millions of potential customers.

Back at the Head Office, a group of 8-12 year-olds is huddled around computer kits, plugging in the colourful components and setting up the computer using simple programming concepts taught through the storybook. And once the computer is fired up, there are challenges, games, and creative adventures the kids pass by using code.

“Our philosophy here is to learn by doing,” says Mathew Keegan, Head of Customer Care. The children couldn’t seem to agree more.

“I want be an inventor and code stuff when I grow up,” says 8-year-old Yuv Chaganti. “With Kano I get to make a computer and learn coding, which is pretty close to inventing.”

Amazon StoriesLaunchpadSeller storyInnovationSTEMAmazon MarketplaceEmpowermentEntrepreneurs
How did you like this story?
Yawn.
It's OK
It's Good
It's Great
I love it!
140 Ratings
Thanks!
In the community 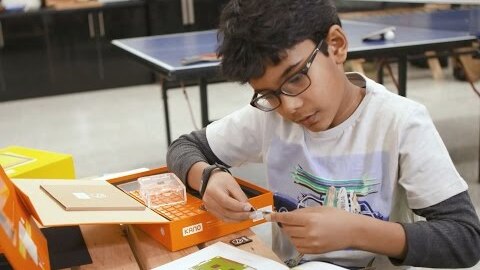