Amazon’s Alexa is always getting smarter and, as Premier League football returns to Amazon Prime Video with an expanded festive fixture schedule, Alexa has swatted up on the official rules of the beautiful game to help football fans across the UK.

Fans can now ask Alexa for the IFAB (International Football Association Board) Laws of the Game to receive instant assistance on the official rules as they watch Amazon Prime Video’s fixture schedule this December, including Liverpool v Spurs on 15th December.

This latest innovation arrives in response to a new study of 2,000 football fans by Prime Video, which found that the nation could use some help in understanding these laws – including handball, offside and red cards for tackles.

Two thirds (66%) of those surveyed admitted to not fully understanding the rules of the game, with four out of five fans (82%) declaring that they would enjoy the game more if they were better clued-up on the official laws. When fans were asked if they would gain any advantage by having instant and reliable access to the official rules during live matches, an overwhelming majority (85%) said yes.

You can use the new innovation to tackle misconceptions head-on by simply asking Alexa:

As part of Alexa’s ongoing training, former Premier League official and current Prime Video refereeing pundit, Mark Clattenburg, was reunited with ex-England striker, Peter Crouch, to put the VARlexa feature through its final paces. Widely regarded as an expert in his field, Clattenburg was enlisted for his elite officiating experience and to transfer his knowledge of the official rules to Alexa. Watch them test Alexa’s new knowledge in the hilarious new video above.

“By teaming up Alexa with experts in the laws of the beautiful game, we’re giving fans instant assistance on the official rules as they watch Premier League football on Prime Video – by simply using their voice,” said Eric King, Director of Alexa Europe. “By increasing Alexa’s sporting knowledge, we continue our aim to make customers’ lives easier by keeping them up to speed with the latest information using voice-technology.”

The feature becomes the latest addition to Prime Video’s Premier League viewing experience and will be available across all Alexa-enabled devices, including Fire TV, for the forthcoming Prime Video Premier League fixtures, starting this Sunday with Leicester City v Brighton, and incorporates two full fixture rounds, meaning every Premier League fan will get to watch their team twice on Prime Video.

For some added fun, fans can ‘throw in’ some additional questions to find out which football team Alexa supports, or who Alexa’s refereeing hero is.

Introducing the new line up for Amazon Devices and Services.

InnovationDevicesAlexaPrime Video
How did you like this story?
Yawn.
It's OK
It's Good
It's Great
I love it!
5 Ratings
Thanks!
In the community 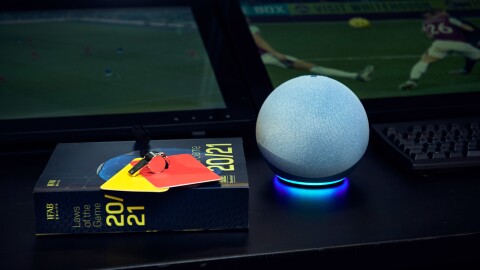