Amazon, The Royal Academy of Engineering and BecomingX have launched a new film series to challenge stereotypes and inspire the next generation of engineers.
By Day One Team

Amazon has teamed up with The Royal Academy of Engineering and BecomingX to release a new series of refreshing and honest films that profile pioneering women engineers, ‘Engineering Heroes’. This series extends the Royal Academy of Engineering’s partnership with Amazon to attract young people into engineering and computer science careers as part of the Amazon Future Engineer, our comprehensive childhood-to-career programme aiming to inspire, educate and enable children and young adults from lower-income backgrounds to try computer science and pursue careers in this field.

The films celebrate engineering and technology trailblazers, uncovering the inspiring stories behind their success and the challenges they overcame. The first three films, which have been released to coincide with International Women in Engineering Day on 23rd June 2021, feature engineering heroes:

The 'Engineering Heroes’ films will be shared on social media and circulated with schools through the BecomingX Education Programme and the Royal Academy of Engineering’s Connecting STEM Teachers Network, supported by Amazon. Through this campaign we aim to inspire the next generation of young people, from all genders, ethnicities and parts of society, as well as challenging public perceptions of engineering.

“Engineering is a fantastic career if you want to make a difference, improve people’s lives and shape the future,” said Dr Hayaatun Sillem CBE, Chief Executive of the Royal Academy of Engineering. “By sharing these powerful stories, we want to inspire many more people from all parts of society to become engineers: engineering is for everyone and we need our engineering community to better reflect the society we serve.”

Lauren Kisser, Director at Amazon’s Development Centre in Cambridge, explains the importance of the films for Amazon: “By sharing the stories of Ursula Burns, Professor Sue Black and Dame Stephanie Shirley directly with school children as part of our Amazon Future Engineer programme we hope to inspire more young people in these exciting, rewarding careers, emboldening the next generation of future engineers.”

The ‘Engineering Heroes’ films are the first to be released in a new campaign for ‘This is Engineering’, which features young engineers who have followed their passion, and joins the established BecomingX film series which include Olympic gold medallists, Nobel Peace Prize winners and Oscar winners.

Amazon is also supporting a number of Royal Academy of Engineering initiatives, including This is Engineering, a multi-year campaign aimed to encourage more young people, from all backgrounds, to consider engineering careers. At the heart of the campaign are a series of short videos, each profiling a young engineer to present a modern image of engineering and illustrate that engineering is behind many of the things young people are interested in like sport, fashion and tech.

Check out the first three ‘Engineering Heroes’ films here – and watch this space for new releases later this year!

In the communitySTEM
How did you like this story?
Yawn.
It's OK
It's Good
It's Great
I love it!
5 Ratings
Thanks!
Sustainability 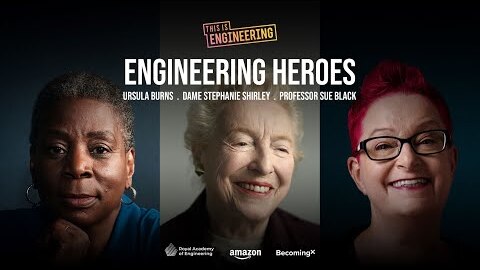