For children with cancer, gold is the colour of hope

Watching Kayla Hay, seven years old, play with her brothers in the family garden in Cambridge, it is hard to imagine the battle that she has fought and won at her young age. She was only five when she was diagnosed with a rare form of leukaemia, Philadelphia-positive Acute Lymphoblastic leukaemia, after returning home from school with a rash on her legs. What followed were two years of intense treatment that left the whole family reeling and Kayla in remission, but dealing with the after effects from a particularly aggressive round of chemotherapy: “The cure nearly killed her. We are incredibly lucky to have her here with us, but we need kinder, safer treatments for children,” says Siana Hay, Kayla’s mum.

“A childhood cancer diagnosis has a huge impact on a family,” says Ashley Gamble, Executive Director of Children’s Cancer and Leukaemia Group (CCLG), a leading national charity in the field.“In the UK alone, more than 30 children each week are diagnosed with cancer. This is why research is so vital.” CCLG was founded over forty years ago by doctors looking to improve survival rates of children affected by cancer. “In the 1970s, around 30% of children would survive their disease,” explains Ashley. “Today, the average is 82%.” While this is a vast improvement, Ashley is keen to point out that the figure doesn’t tell the whole story. “This is the overall survival for all childhood cancers, but there are still some with a poor outlook. Many treatments can have long-lasting side effects that will affect the lives of children forever, causing disabilities and secondary disease. Further research is essential, and the ultimate aim of CCLG is to cure as many children as possible while reducing the short and long-term side effects of treatment.”

Besides bringing together professionals involved in the treatment and care of children with cancer, from researchers to doctors and nurses, CCLG is also an important source of support for patients and families. It provides them with expert, reliable information resources as they go through their therapeutic journey and navigate the emotional fallout from the diagnosis. “Their literature was immensely helpful to us,” remembers Siana. “When dealing with cancer, families need consistent support, somebody you can lean on day and night. CCLG’s one-to-one help was outstanding, I can’t thank them enough.”

In September, Childhood Cancer Awareness month, Amazon has launched its global Go Gold programme to help raise awareness and funds for research, but also to turn on a spotlight on the life-saving work done by many organizations to improve the outcomes and quality of life of children with cancer. In the UK, the company has partnered with CCLG and organized STEM activities for children inside Amazon fulfilment centres and hospital wards – a day of fun to encourage kids to think big, innovate and have a sense of hope in their futures. A golden Amazon van has delivered gifts, STEM equipment and donations to local hospitals and charities, while Amazon sites have organized tours, glitter stations and surprise gifts for visiting children. Employees donned their pyjamas at work in solidarity with the kids who often spend years living in their pyjamas during treatment and recovery, and £50,000 was donated to CCLG to fund innovative research projects.

“Amazon’s collaboration is hugely important for us. Research has changed childhood cancer outcomes over the last 40 years, improving survival rates and finding new treatments. Amazon’s support and donation will allow us to invest further into research and keep driving change,” says Ashley. One of CCLG’s current areas of focus is raising awareness on early signs and symptoms of childhood cancer and improving the accuracy of early diagnoses: “Our findings show that six out of ten adults wouldn’t feel confident about recognizing the symptoms of childhood cancer. But for affected children, an early diagnosis means higher survival chances and the possibility to receive kinder, less intensive treatment – one that may have fewer severe side effects in the long term. This is why raising awareness and supporting research is so incredibly vital.”

Now that Kayla has finished her treatment, she can finally catch up with everything she missed in her months at the hospital – like going to school and playing with her brothers. “Her journey is far from over, but we are very grateful for the support we have received, and we are keen to give back,” says Siana. CCLG have helped her create a Special Named Fund, Kayla’s Rainbow Appeal, to raise money for research. The family has organised a non-uniform day at Kayla’s school, and friends have taken part in skydives and run a half-marathon for the child. “Many people still don’t want to talk about childhood cancer and its implications. It is painful. Nobody understands it better than we do,” continues Siana. “But we need to.”

Good causesIn the communityAmazon Stories
How did you like this story?
Yawn.
It's OK
It's Good
It's Great
I love it!
22 Ratings
Thanks!
Sustainability 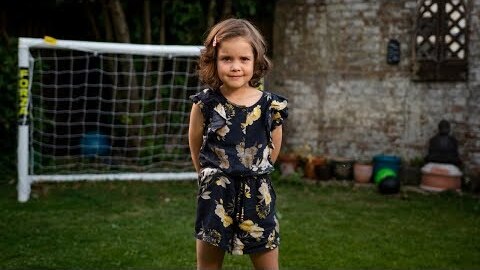 For children with cancer, gold is the colour of hope