‘He saved my life, my children’s lives and also my neighbours’ life.'
By Day One Team

Since the start of the COVID-19 pandemic, our delivery service partners and their drivers have been a part of a very special group of people who have continued to serve communities across the UK.

At Amazon we are proud of the many hero drivers who have gone the extra mile in these unprecedented times. One of these exceptional people is Kenny Beatson, who delivers parcels in the Edinburgh area for delivery company Pegasus.

Kenny was on his route delivering parcels in Gorebridge before Christmas when his quick actions helped save the lives of residents after discovering a fire had broken out in a block of flats.

Kenny’s first instinct was to call the fire brigade and alert the residents to the danger. This included a family of seven with five children, the youngest of which was only 10 weeks old, who were unable to leave the building as the smoke was too great. From outside, Kenny advised them to keep away from the door and stay near the windows to get fresh air and tried to keep the family as calm as possible until the fire brigade arrived.

Elouise Cox, who lives on the first floor of the block of flats, said: “On the day of the fire Kenny wasn’t even delivering to my flat. If it wasn’t for him I can’t even imagine what could have happened. He saved my life, my children’s lives and also my neighbours’ life and I can’t thank him enough.

“He put his own life on the line to save the families in this block and he is a hero. We can’t imagine the outcome had he not done something and we are all so grateful.”

Kenny said: “I didn’t really do anything, I just did what I’d expect others to do. I don’t see myself as a hero but my family are all really proud of me. “

He added: “It’s really touching that as far as Elouise is concerned, if I hadn’t done what I done, she doesn’t think she and her family would be here. It’s quite overwhelming, I’ve got kids of my own and I can’t imagine what they were going through.”

Kenny, who loves cooking and won a competition for home cooks, also received a surprise video message from one of his heroes, Michelin star chef Tom Kitchin, after he heard about his brave actions. He is now looking forward to his gift from Amazon of a meal at Tom’s restaurant, The Kitchin in Edinburgh.

Kenny said: “It’s amazing to think one of my heroes has given me a personal message. The fact I will be having a meal at The Kitchin and I’ll get to meet him is absolutely unbelievable!”

Bruce Waddell, Senior Delivery Station Manager, said: “I could not be prouder and would like to thank Kenny for his bravery. I think the job all the drivers do in delivery stations across the UK is phenomenal and Kenny’s a real credit to that profession.”

Meet more of our amazing people who have gone above and beyond for their communities.

Our peopleIn the communityAwards and recognition
How did you like this story?
Yawn.
It's OK
It's Good
It's Great
I love it!
175 Ratings
Thanks!
Sustainability 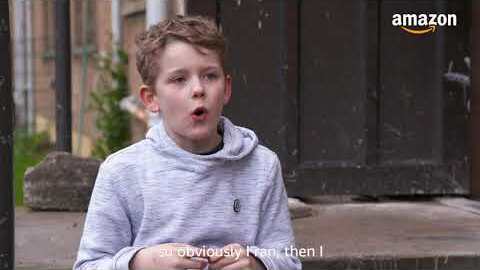