New literacy programme, Amazon Reads, forms part of our global effort to address growing education inequalities as a result of COVID-19.
By Day One Team

Thousands of children across the UK have received literacy packs from Amazon as part of a programme designed to help young readers and increase awareness of the ever-growing education gap.

School closures due to lockdowns during the pandemic have affected almost to 1.6 billion children* and young people worldwide. In response, we launched Amazon Reads, our global campaign focused on youth and education. The programme aims to raise greater awareness of pandemic-driven education inequalities in literacy**, while also raising funds for literacy charities.

The campaign is part of a global effort to equip primary school children (aged 5 – 11) with better access to basic education, specially focused on literacy.

As part of the Amazon Reads campaign in the UK, we made a £50,000 donation to National Literacy Trust, an independent UK charity working with schools and communities to give disadvantaged children the literacy skills to succeed in life.

“The Amazon Reads programme will make a real difference to young readers across the UK, giving them access to new books and materials aimed at developing literacy skills,” said Jason Vit, Head of Local Areas at the National Literacy Trust. “I’d like to thank the Amazon team for this fantastic work.”

The donation to National Literacy Trust was boosted by local donations to schools and literacy charities in the communities around our operating locations in the UK. Schools and charities were chosen by employees living and working in these communities, with engagement with the programme encouraged through literary dress up days and booked-themed fun events.

We have also shipped thousands of literacy packs to primary school children across the UK from our fulfilment centres in Durham and Tilbury, distributed by partner schools to the families most in need of educational resources.

One of the team at our fulfilment centre in Durham who prepared the packages was Ainsley Fannen.

“The Amazon Reads programme is a great opportunity to do something different, especially when it’s in aid of children and charities. It’s nice to play a little part in that,” he said. “This programme is a thank you to the charities and volunteers in our communities who are helping children and families during these difficult times.”

Amazon Reads also invited our employees to take part in a national competition to design a literary-themed bookmark. The winning design, chosen by an independent panel from National Literacy Trust, came from our fulfilment centre in Kegworth. It beat entries submitted from all over the country and received a further £10,000 donation, which was given to Stonebow Primary School in Loughborough.

In total, Amazon Reads has reached thousands of children and families across the UK and donated almost £100,000 to schools and literary charities to date. By providing a helpful resource to young people we hope to play a small part in showing them the joy of reading, and increasing literacy proficiency.

*Based on a 2021 report by Teach First.
**According to research carried out by UNESCO, published in March 2021.

Find out more about how Amazon is supporting local communities.

In the community
How did you like this story?
Yawn.
It's OK
It's Good
It's Great
I love it!
6 Ratings
Thanks!
Sustainability 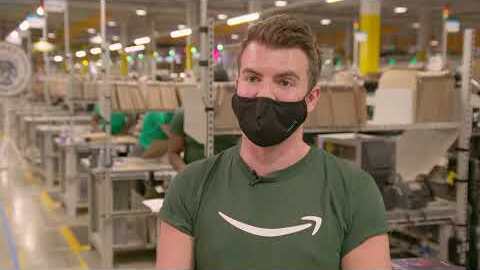