Author and YouTuber Lucy Powrie joins a stellar literary line-up to read short clips of their works and celebrate LGBTQ+ visibility for Pride.
By Day One Team

“Books have been a source of comfort and escapism for many during the lockdown, and at the same time many Pride events have been put on hold,” said Gareth Johnson, co-chair of Glamazon UK, the employee group that promotes LGBTQ+ diversity and visibility at Amazon.

“That inspired Amazon’s books team to ask some of their favourite authors to read from their own works and to celebrate LGBTQ+ visibility.”

The short and poignant videos are timely reminders of the importance of voices being heard. These writers come from diverse backgrounds – they are not just LGBTQ+, but also people of colour, parents, partners, a peer and a priest.

In the first video (above), Lucy Powrie sums up the importance of LGBTQ+ representation in literature with a short passage from her Young Adult novel, The Paper & Hearts Society: Read With Pride. Lead character Olivia sets up a book club and tries to get the #ReadWithPride hashtag trending.

Check out more videos below and join the conversation on social media with the hashtag #ReadWithPride.

The first black woman to win the Booker Prize reads from the novel that took the 2019 award, a story of 12 women on their personal journeys through the UK over the past hundred years. Bernadine was a judge of the 2019 LGBTQ+ Polari awards.

Adam Kay reads from This is Going to Hurt: Secret Diaries of a Junior Doctor

This bestseller has rocketed back up the charts as readers everywhere show their support for the NHS. In this timely clip, Adam Kay examines why our health service is so loved. Adam, once voted one of the most influential LGBTQ+ voices on Twitter, lives in Chiswick with his husband.

Adam Kay reads from This is Going to Hurt: Secret Diaries of a Junior Doctor

Alex Bertie reads from Trans Mission: My Quest to a Beard

Navigating puberty is a tricky time for teenagers, and if you combine the experience with coming to terms with being a transgender man, it can be even more complex and confusing. YouTuber and writer Alex Bertie takes us on his journey in Trans Mission and his quest to grow a longed-for beard.

Alex Bertie reads from Trans Mission: My Quest to a Beard

The writer’s debut novel explores what it means to be a young black man in modern Britain. This excerpt features one of the two protagonists, Jesse McCarthy, who, like Paul, is a former Jehovah’s Witness from the West Midlands and is estranged from his family following coming out as gay.

This is a sneak preview from Val’s new novel, Still Life, to be published in August. Val is one of the UK’s bestselling crime authors, whose works have been translated into more than 30 languages and have sold more than 16 million copies. She lives in Manchester and Edinburgh with her wife and her son.

Reverend Richard Coles reads from Bringing in the Sheaves: Wheat and Chaff from My Years as a Priest

The vicar of Finedon in Northamptonshire, who is also a BBC Radio 4 regular, a past Strictly Come Dancing contestant, and a member of the band The Communards, muses on marriage and Christianity in this excerpt from his memoir.

Reverend Richard Coles reads from Bringing in the Sheaves: Wheat and Chaff from My Years as a Priest

Transgender writer Juno Dawson reads from her new novel, released just last month, a searing exploration of mental health, gender and privilege. Her previous book, Meat Market, won the YA Book Prize. As well as books, Juno has written for Glamour, Attitude and is a Stonewall activist.

Michael Cashman reads from One of Them: From Albert Square to Parliament Square

Famous as Colin from EastEnders for being one half of the first gay kiss on British television, Michael Cashman has also been a gay activist, an MEP, and is now a member of the House of Lords. He reads from his own story, One of Them: From Albert Square to Parliament Square, about growing up in the post-war East End of London.

Michael Cashman reads from One of Them: From Albert Square to Parliament Square

John Boyne reads from My Brother’s Name is Jessica

Nothing is ever the same again for Sam’s family in this passage from My Brother’s Name is Jessica, read by the author of The Boy in the Striped Pyjamas. John Boyne’s experience of growing up gay in Catholic Ireland has had a lasting impact on his writing and life.

John Boyne reads from My Brother’s Name is Jessica

In this excerpt, Stella Duffy shares a sneak peak of a transgender character in her new (and 17th) novel, Lullaby Beach, set to be released next year. Stella has also written fourteen plays, more than seventy short stories and is the recipient of the Stonewall Writer of the Year award twice.

You can also find out more about Amazon’s commitment to LGBTQ+ equality and rights on the Day One blog, including the LGBT+ Reading Roadshow which brings stories of diversity and inclusion to schools; Amazon being named a Top 10 Inclusive Employer by British LGBT+ Awards, sponsoring the 2019 PinkNews Awards and playing host to the first-ever LGBT+ Leaders STEM conference.

Click to watch more #ReadWithPride videos
A stellar literary line-up of LGBTQ+ authors and stories share their stories for Pride.
Continue reading
Pride in LondonCulture and diversityDiversity
How did you like this story?
Yawn.
It's OK
It's Good
It's Great
I love it!
Thanks!
Working at Amazon 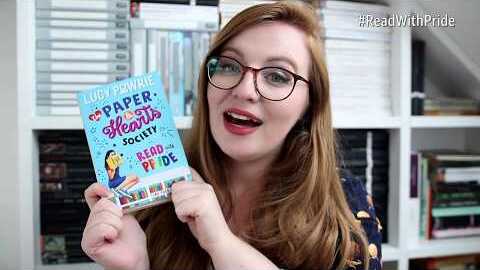